Games have been played for a long, long time now. Remember those countless hours we spent playing Pacman on the arcades or playing Pokemon on our Gameboy Colors as children? For sure we do .

Nick Yee, a scientist who made one of the first steps in building a framework for studying motivations, found three motivation components1. There is the achievement component, which includes the want to advance in the game, the interest in the rules and system of the game, and the want to compete with others. Next is the social component, which is the want to form connections with others, liking to chat and help other players, and the want to be a part of a group effort. Last, there is the immersion component, which is creating and customizing a character to play in the unique story of the game as well as wanting to a escape from real-life. But there has to be more to why we like to game so much though, right?

Run your own studies, playtests and UX Analysis in the cloud using Antidote.

Another study2 found other motivational factors using Richard Ryan and Edward Deci’s Self Determination Theory3. That is a theory which states that human behavior is driven by the need for competence, autonomy, and relatedness. If those needs are met, we enjoy activities more, even in gaming. Competence is fulfilled in games through flow, which is a completely focused mental state, and is used to explain the enjoyment of games. Flow is met in games when a game challenges the player enough so that it is still interesting and makes gamer want to continue to play, but not too hard where it is not fun anymore or too easy where it becomes boring. Autonomy is met because we have control in games and we voluntarily play games. Lastly, relatedness is fulfilled because we are able to interact and compete with others in a way and world that’s different from real life. 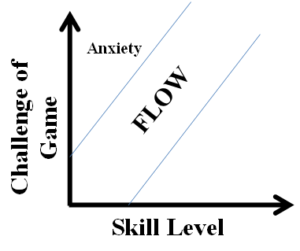 Other studies have researched the features of games that are attractive to players. One study4 found many features such as the enjoyment and relaxation gained from gaming, having no constraints in games like in one may have in real life, the artistry of the game, and the interactivity and competitiveness of a game. Hmmm, no wonder why we can’t get enough of going to different worlds to take down Bowser, and save Princess Peach in Super Mario Bros.

Now, let’s talk about why we continue to play games. A study done at National Dong Hwa University5, found that the satisfaction and flow experience plays a major role in whether one intends to continue to play a game. As mentioned before, factors that can relate to flow and enjoyment include the game story, graphics, and control6. Those all contribute to continuance of playing. The social part of gaming is also very important. Especially in multiplayer and online games, if one has achieved a lot, gained recognition, or has made many connections with players, those play a significant roles in if one will continue to play a game7.

Finally, let’s point out some positive effects of gaming. Research has shown that as opposed to non-gamers, gamers had better visuo-motor coordination, spatial representation, iconic skill, and visual attention8. Furthermore, recently there’s been a change in focus in the gaming world, where people have had an interest in using games for a purpose other than just entertainment. They are called serious games, and the purposes are related to helping with problems in fields such as health care, education, and more. So despite what our parents may have said to us, it’s looking like all those hours we spent and are continuing to spend on video games are not a waste. Not only is it fun and relaxing, but games are starting to change the world beyond from just entertaining us on our sofas.

Would you like to understand better gamer psychology? Take a look at our playtesting solutions!